Home > Officer Can’t Even Imagine Not Wearing His Body Armor

Officer Can’t Even Imagine Not Wearing His Body Armor

As Deputy Bryan Bittenmaster of the Frederick County (Md.) Sheriff’s Office has gained experience in the field, he’s learned to take extra steps to protect himself, but “the biggest step I can take to protect myself is to always wear my body armor.”

Bittenmaster, who began his public safety career as an emergency medical technician in New Jersey, says he can’t imagine leaving his house in uniform without wearing his armor, and when he has a detail in “soft” clothing, he feels naked.

“The vest is a force multiplier for survival. It falls in line with physical fitness, marksmanship and other steps you can take to protect yourself,” Bittenmaster says.

From his years working as an EMT, Bittenmaster has first-hand knowledge of the devastating impacts of gunfire on an unprotected body: “Cops have a tendency to think it’s only the big guns that can kill. Sometimes it can be something as small as a .22 that hits the femoral artery and the person bleeds out. I’ve also seen people take a .45 hit a millimeter below the aorta and live to tell about it. I’ve seen people survive 30 shots from a handgun, I’ve seen people survive shots to the head and chest.”

In his six years providing emergency medicine, Bittenmaster worked in both rural and inner-city areas, responding to a gamut that ranged from car accidents to gunshot wounds due to gang violence. He started as a volunteer EMT at age 17 and made it his profession a year later, but he always dreamed of working in law enforcement.

“I thought working in EMS first would give me a valuable tool that I could carry with me to a law enforcement career,” he says. And that knowledge is what led him to take his department-issued emergency tourniquet and wear it in a pouch on his duty belt, something that not all deputies do. That way, if he is seriously injured, he can apply the tourniquet and possibly prevent himself from “bleeding out,” a common cause of death from trauma. In the rural areas of Frederick County, where backup can be 20 minutes or more away, that’s extremely important.

“We’re all issued the tourniquets, but we aren’t required to carry them on our belts,” Bittenmaster says. “We’re also issued medical kits that we keep on our headrests, and if one of us is injured, the next deputy on the scene knows exactly where to get the kit and what’s in it.”

Although acknowledging the importance of carrying medical equipment and keeping up with physical fitness and training, wearing a vest is still the biggest safety precaution a deputy can take, says Bittenmaster, who has no trouble faithfully following Frederick County’s mandatory wear policy. Most days, for most officers and deputies, are routine, but an officer never knows what could happen on any given shift. 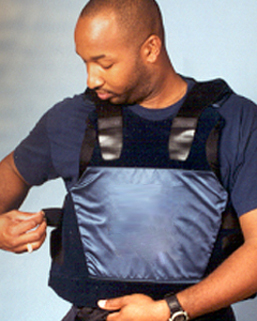